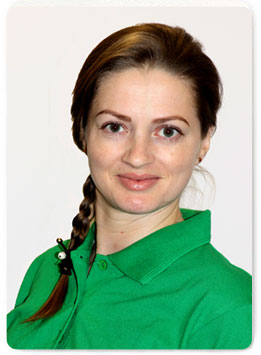 Doctor - kid's dentist, a member of the Ukrainian Association of Preventive and Pediatric Dentistry

In 2008 she graduated from the Dentistry Faculty of the Ukrainian Medical Stomatological Academy, Poltava. She is a member of the Association of young researchers-dentists at the Department of Microbiology, Virology and Immunology.

2008 - 2010 - internship at the Pediatric Department of the Illichivsk stomatological polyclinic of the Illichivsk Basin Hospital on water transport, working her way with school № 4 and kindergartens №№ 11 and 12.

In 2010 she graduated from the Odessa State Medical University with a specialization in General Dentistry.

In 2011 she passed a specialization in Pediatric Dentistry at the Odessa State Medical University.

In 2012 she was trained at the Institute of Postgraduate Medical Education (Institut Postgraduálního Vzdělávání ve Zdravotnictví), Prague (Czech Republic).

2013 - volunteer work in the youth center in the township Tyvrov, Vinnytsia region.

In February 2018 she joined the team of kid's dentists of the pediatric department  of "Dubnova Clinic "STOMATOLOGiYa".

The doctor loves her job of dentist, especially she likes working with children. Her primary focus in the kid's dental reception is to get acquainted with the child and become his/her friend; to cure, that means to "do everything within the power of the doctor"; to teach a child to care for the teeth in such a way as to defeat the "carious monster" forever.

She believes that there are no conflicting children, there are only children with negative experiences that require more attention and understanding from the kid's dentist. She dreams that the time "Health" will come.

In her practice she is guided by evidence-based medicine and the successful experience of other countries. She believes that in the treatment of dental diseases a complex approach should be applied, since the oral cavity is part of a one whole organism. Key areas of professional interests of the doctor in pediatric dentistry are prevention, aesthetic restorations and endodontics.

She is fluent in Polish and studying English actively.

In her spare time she likes traveling, learning new cultures, observing ancient architecture and spending time with her family.

Initial situation: the child's parents consulted kids dentist about the presence of "black dots" on the lower permanent teeth of Polina. During the checkup, small carious cavities were found in fissures (sulcus) of the tooth on permanent molars on the left, photo 1 and on the right, photo 2. 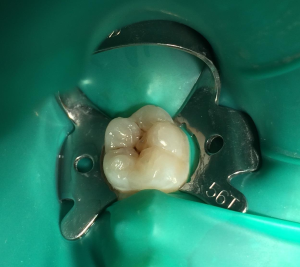 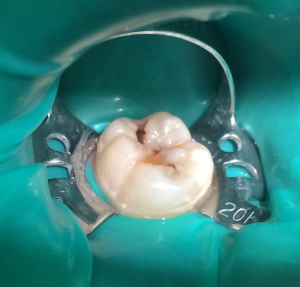 Assessment of the situation: It was decided that Polina’s teeth should be treated at an early stage (as long as the caries did not spread deeper).

As the teeth are on opposite sides, the treatment in pediatric dentistry was carried out in 2 stages.

1) After anesthetizing the tooth on the left (with the help of computer anesthesia), in the area of the tooth 3.6, a cofferdam was used (a rubber-dam, which would protect the child from medical materials in the mouth, as well as to isolate the tooth under treatment from moisture). After that, tooth-tissue, affected by caries, was removed, photo 3.

2) Then the restoration of the anatomical integrity of the tooth was carried out (photo 4) with the help of modern photopolymer materials (the filling was inserted). 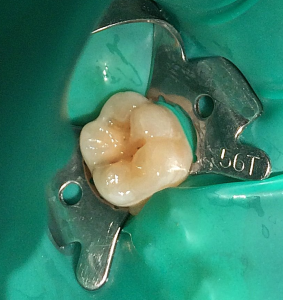 3) Similarly, we acted with a tooth on the right. However, after removing the tissues affected by caries from the tooth (photo 5), it became clear that the carious cavity was very deep in this tooth, although the tooth decay was not visible externally.

4)  In summary, the tooth is completely restored with durable and long lasting photopolymer material, photo 6 (the filling was inserted). 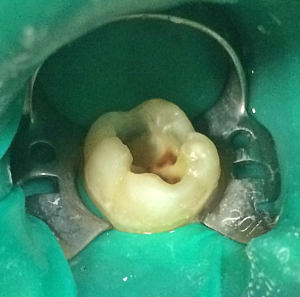 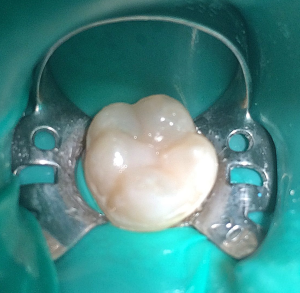 Result: The child and her parents are very pleased that the treatment was carried out at an early stage, painlessly and with minimal intervention. Now parents understand the necessity of professional checkups of the child at the dentist, because often they cannot identify and, moreover, assess the depth of the child's carious cavity. Polina comes for checkups with pleasure; after all it is better to brush the teeth, than to treat them with dentist.

Link to this story: https://stomatologia.com.ua/en/sukhova-alexandra-mikhailovna.html#data-history=1

Reviews about the doctor