Plasmolifting is a method of local stimulation of tissue regeneration using platelet autoplasma (prepared of the patient's own blood).

Information about the special attitude of doctors to blood can be found in various cultures of the ancient world. In the "Nei King" manuscript, which is the bible of ancient Chinese doctors, it is said about taking own blood as an effective kind of medicines.

In a full-fledged method of treatment the use of blood developed much later. In 1615, Andreas Libavius conducted a blood transfusion with the help of a silver tube directly from one person to another for the first time. In this case, it was a question of the rejuvenation’s course of the patient.

The first real blood transfusions from person to person, that helped to save the life of an exhausted woman in labour, were conducted by James Blundell in 1819.

In the same direction, a well-known surgeon, Professor August Bier worked. In 1905, he established that the patient's own blood, introduced to his thigh, is a kind of irritant to the body.

During the Russo-Japanese War (1904-1905), Valentin Feliksovich Voyno-Yasenetsky worked as a surgeon in a military hospital, where he used autohemotherapy to treat the Russian Empire army's soldiers. In 1934 Voyno-Yasenetsky published "Sketches of purulent surgery", where the methods of autohemotherapy and autoserotherapy and the field of their application were described.

Positive results and a minimum of side effects have made the autohemotherapy and the autoserotherapy the commonly used auxiliary methods of treatment for many years up to the beginning of the era of antibiotics with a broad antimicrobial spectrum. Over time, these methods began to be used less and less often, their significance was artificially reduced. And after the death of V.F. Voyno-Yasenetsky (1961) the autohemotherapy was almost forgotten.

A number of scientists were studying the influence of leukocyte mass, erythrocyte mass, native serum, plasma, whole blood, fibrin on the healing of closed fractures of long tubular bones. They found that the best effect has the leukocyte mass, but it is necessary to pay attention that the blood used in the work was donated, not the patient's own blood, it did not exclude the possibility of infection.

This method is also used in traumatology in the form of intradermal and subcutaneous injections of the patient's blood in the course of radicular pain in case of osteochondrosis, lumboischialgia and the syndrome of radicular compression, in the gluteal region in the treatment of chronic nonspecific arthrosis of different localization.

Other fields of use include ophthalmology, allergology and immunology, gynecology, urology, otorhinolaryngology, neurology and, finally, dentistry.

A new stage in medicine lies in the creation and use of the injection form of platelet autoplasma, developed in 2001 by Russian scientists: Professor, Doctor of Medical Sciences Akhmerov Renat Rashitovich and Candidate of Medical Sciences Roman F. Zarudiy.

That time and the original name of the PlasmoliftingTM technique was invented. This is a method of stimulating tissue regeneration by local injection of platelet-rich autoplasma. Scientists have also created a specialized test tube PLASMOLIFTINGTM, which allows you to get the high purity plasma with the necessary therapeutic concentration of platelets in the outcome.

In 2004-2007, there are first publications on the use of PLASMOLIFTINGTM methods in dentistry and cosmetology. In 2009 A. F. Makhmutova defended the Candidate's thesis on stomatology: "Efficiency of complex regenerative treatment of patients with inflammatory periodontal diseases" in Moscow.

In 2011, within the framework of the 10th Anniversary International Symposium on the Aesthetic Medicine, Professor R.R. Akhmerov presented the report: "Autostimulation of regenerative processes in maxillofacial surgery and cosmetology".

Blood is the liquid tissue of our body, which with the lymph together are the internal environment of it. Blood supplies the body with oxygen, organic substances, mineral salts, hormones, vitamins, etc., it also removes toxins from the body. Blood is responsible for almost all metabolic processes. Everything that happens in the blood is thought out, taken into account and interconnected. Nature demonstrates all the magnificence and perfection of its creation!

Blood consists of intercellular substance (plasma) - a transparent liquid of pale yellow color (55% of the total mass of blood) and cellular elements ("formed elements") suspended in it (45%). Three of their main types: red blood cells (erythrocytes), white blood cells (leukocytes) and thrombocytes (platelets). They are suspended in the liquid part of the blood - a plasma, the composition of which is multisyllabic (proteins, salts, hormones, enzymes, vitamins and other substances). Plasma maintains the constancy of the internal environment of the body, i.e., homeostasis and provides the transport of proteins, hormones, amino acids and blood elements.

Thrombocytes (blood platelets, platelets, PLT) are the smallest denuclearized cells 2-4 μm in diameter, which are "fragments" of the cytoplasm of megakaryocytes of the bone marrow. The life span of platelets is 7-10 days. In blood vessels, platelets can be located at the walls and in the bloodstream. In a calm state (in the bloodstream), the platelets are disc-shaped. When cells are activated, platelets acquire sphericity and form special outgrowths (pseudopodia). With the help of such outgrowths, the blood plates can stick together or adhere to the damaged vascular wall. Platelets are potent bio agents of regenerative processes, because they contain alpha granules rich in growth factors. Growth factors are necessary for cellular differentiation and normal cell cycle. The symbiosis of growth factors is responsible for reconstructing the blood vessels of the injured area, building a new tissue (epithelial, connective, muscular, nervous) and stopping bleeding. The gamma granules of platelets contain ATP, serotonin, calcium ions Ca2 +, ADP (adenosine diphosphate), lysosomes (acid hydrolases).

Functions of platelets are very diverse, but one of the most important functions in platelets is regeneration due to growth factors. The main growth factors are deposited in alpha-granules. Their secretion and activation occur against the background of platelet activation / degranulation in the wound (approximately 10 minutes after the formation of the fibrin clot). Within the first 10 minutes, platelets secrete about 70% of the growth factors from those that are in them. Almost complete release of growth factors occurs within an hour. Platelets continue to synthesize additional growth factors for about another 8 days, after that they complete their life cycle.

The content of a large number of growth factors affects bone tissue, connective and endothelial tissues. The effect on bone tissue is a very important aspect for dentists. In addition, it influence on the connective tissue and, therefore, on the formation of collagen fibers and intercellular substance. Growth factors also trigger the formation of a young capillary mesh, and where the growth of blood vessels are, and hemodynamics, metabolism and oxygenation of tissues will improve, and this will contribute to the formation of young tissues. In addition, the factors affect the proliferation, differentiation and chemotaxis of cells.

Regeneration of tissues is due to factors that are contained in platelets. Fibroblasts begin to secrete collagen to the second- third day after the lesion. The peak is 1-3 weeks. The production lasts for 3-4 weeks, and then the balance happens. The growth of granulations gradually ceases with a decrease in the mitotic activity of fibroblasts, then apoptosis of the fibroblasts occurs. In addition, the wound begins the formation of new vessels from intact blood vessels. This improves oxygenation, metabolism and hemodynamics in this area. So, the processes of wound healing are normal.

But we often deal with chronic and undulating processes. In this case, such are chronic gingivitis and periodontitis. The reasons of which are very diverse, it may be a violation in the immunity system, or due to the high bacterial virulence and duration of bacteria's exposure, disorders of blood and lymph circulation, so it becomes very important to influence and stimulate tissues at these stages of inflammation, regardless of the stage of chronic inflammation. And it becomes possible by stimulating regeneration processes when platelet autoplasma is introduced into the area of ​​chronic inflammation.

The autoplasma which is enriched with platelets stimulates the formation of epithelial (epidermis and mucous membranes), muscle and connective tissues (cartilaginous, bone fibrous) containing primary, secondary and tertiary growth factors in high concentration and natural combination, affects all stages of regeneration simultaneously, and provides synergism of the body's recovery reactions.

To achieve these effects, a specialized test tube Plasmolifting and a centrifuge with developed centrifugation regimes are required. 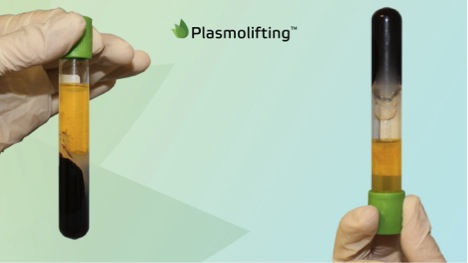 Requirements for the treatment of periodontal diseases is not simply the removal of inflammation, but also the prevention of further loss of bone tissue, restoration of color, shape and structure of gum tissues for a longer period, stimulation of regeneration processes and, thereby, reduction in the frequency of exacerbations.

Today the treatment schemes for periodontal diseases include the use of general and local medicines.

Everything that is applied "per os" is either antibacterial drugs, which can also be local, or osteostimulating drugs. Antibacterial drugs, removing only inflammation, do not trigger regeneration processes. All osteostimulating drugs are, first of all, not the cheapest ones, require long-term administration and, therefore, adequate control of the kidneys and gallbladder, therefore, additional time and patient resources are required for carrying out the control analyzes.

Locally, preparations for the treatment of periodontal diseases can be applied in application and injection forms. It has already been repeatedly established that application drugs are absorbed only by 7-10%, so the effectiveness of these techniques is extremely low. Injection drugs often only relieve inflammation and temporarily improve hemodynamics, also not directly triggering regeneration processes. But it must be remembered that the tissues of this area are already structurally destroyed, it means that the supply of nutrients and "building" cells is difficult, and the resultant effect will be temporary and not expressed.

One of the attempts to stimulate regenerative processes is the use of hyaluronic acid, also in the form of injections. Today, hyaluronic acid has a wide range of applications in cosmetology. It is a structural unit of connective tissues, integrating into the matrix, only temporarily restores and saturates them with water, without affecting the regeneration processes. In addition, hyaluronic acid from a number of manufacturers is a synthetic product, that makes it more difficult to adapt; And, where it has an animal origin, there is a risk of developing allergic reactions. Also, high cost is a deterrent to widespread introduction of it into the practice work of a dentist.

There are currently no methods to perform targeted regeneration in small areas of the teeth-jaw system, such as the location of the implant or the area of bone plastic, in the area of the sine-lifting or the socket of the removed tooth, in the area of osteosynthesis or the established membrane, in the maxillofacial areas of soft tissues during acute and chronic infectious and inflammatory processes, as well as for the rehabilitation of patients.

Therefore, the proposed method of using auto-plasm in the form of injections makes it possible to stimulate autoregeneration processes in the necessary areas and tissues.

The method is effective, because it an remove inflammation and stimulate regeneration. Absolutely safe, because it uses its own plasma. The volume of the intervention is minimal, only locally, and with a low degree of soreness. Can work independently or in combination with other methods, shortens the healing time. Reduces the incidence of complications. Extends the phase of remission.

A clinical example. Patient M. Diagnosis: Generalized periodontitis of the first degree, chronic conditions.The condition of periodontal tissues before and after treatment on the seventh day with the use of the plasmolifting technique. 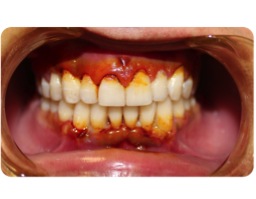 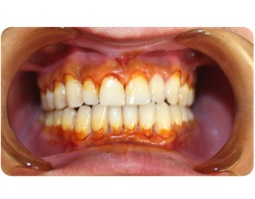