Newborn babies nearly always do not have a single tooth, although in rare cases their prenatal development is observed. In the period between 6 and 8 months of life of the kid, the central incisors of the lower jaw, and then the upper ones are appeared. The formation of the milk bite of the kid begins at the age of about 6 months. By the age of 8-12 months, the lateral incisors erupt first at the lower jaw and then at the top. At 12-16 months the first molars erupt, by 16-20 months the canines erupt, and by 20-30 months the second molars erupt, and thus completing the formation of the milk bite of the teeth. Accordingly, a 3-year-old kid should have all first teeth erupted. There are only 20 teeth.

Starting from 3 to 6-7 years, the milky period of teeth bite lasts, and then begins the gradual change of the milk bite of the teeth to a permanent one. That is, approximately, in the 7th year of life, the first teeth change to permanent ones, the time of eruption of which, as a rule, coincides with the roots resorption of the first teeth and their falling out.

Some kids are stand out of the above scheme of teeth eruption in one period or another. Since the time of appearance of one or another tooth and their order is laid down by nature itself, a failure in this scheme may indicate problems. It depends on heredity, on how the mother passed the pregnancy, on the nutrition of the infant, and even on certain diseases, in particular, rickets. The scheme of first teeth eruption looks like this: 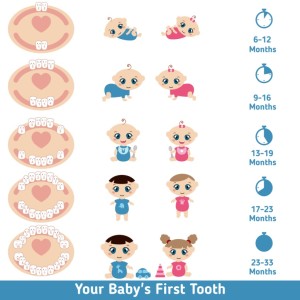 If the sequence or timing of teeth eruption in a kid is significantly impaired, it is worth visiting a pediatric orthodontist for consultation.