Do we need wisdom teeth? What is better: to treat them or to remove them? Is it right to get rid of something given to us by Nature itself? Many people ask these questions. Artiom V. Dubnov, a dentist at our clinic, maxillofacial and orthognathic surgeon, knows the answers.

When do wisdom teeth erupt?

A wisdom tooth (or simply, the “eighth tooth”) is the eighth, last, tooth in the row of teeth, otherwise known as the third molar. It got its name, because it erupts last, when a person reaches intellectual maturity – becomes wise.

Many believe that time of the eighth teeth appearance does not depend on how old the person is. It is a misconception: roots of wisdom teeth start forming at 15-17 years of age and wisdom teeth themselves grow until 25 years of age on average. Sometimes they erupt a little earlier or later, and sometimes they do not appear at all. But, if you are over 27 and have no wisdom teeth, there is no point in waiting for them to erupt.

Older patients, who came to the dentist thinking they are cutting a wisdom tooth, more often than not suffered from pericoronitis. It is inflammation of the part of the gum that covers a tooth that has partially erupted like a hood.

Why do we need wisdom teeth?

We got wisdom teeth from our far ancestors, who mainly ate hard and tough food. To chew it, they needed strong jaws. Human nutrition changed over time. Today we eat a lot more thermally processed foods. “Softening” of our ratio led to the eighth teeth losing their initial function and the jaw becoming smaller. In the modern world, we can see anodontia of the third molars more and more often, that is a situation when wisdom teeth do not form at all.

According to statistics, about 92% of adults have the greatest number of wisdom teeth (four) provided for by the Nature. In 25% of humans, the third molars stay in the gums. And about 8% do not have them at all, which is not pathological, but an individual peculiarity.

A considerable part of modern scientists considers large last teeth a useless rudiment, which creates too many problems, and thinks that the best decision is to remove wisdom teeth, while they are still forming. However, specialists also note useful functions of the eighth teeth. For example, they protect neighboring teeth from loosening and gaps formation, where food remains may accumulate. Besides, it is to the large last teeth that bridges are sometimes attached.

What complications can wisdom teeth cause?

More often than not, wisdom teeth grow with complications.They can shift, grow at an angle or erupt partially causing inflammation of bone and gum, disrupting occlusion, damaging inner cheek surface and destroying the teeth they touch.

The main reason of complications is a small jaw, which simply cannot hold the maximum number of teeth. It is lack of space that causes teeth to squeeze or their retention (incomplete eruption). The third molars appear, when the jaw bones gradually stop to grow. That is why wisdom teeth simply have no place to grow into.

When a wisdom tooth is erupting, apart from general discomfort (pain, gum swelling, fever), in 80% of people it causes festering imflammation, which can be a real danger to health and life. The gum around the erupting tooth takes the shape of a pocket with a hood, under which plaque, food particles and bacteria gather (see Fig. 2). This causes festering and unpleasant odour. 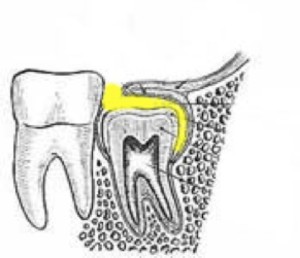 The third molars take the last and the most hard-to-reach place in the jaw and are often insufficiently cleaned during hygienic procedures. This leads to caries, which the wisdom teeth pass to the rest of the teeth.

In order to avoid complications connected to the eruption of wisdom teeth and occlusion, I strongly recommend to visit an orthodontist – they specialize in correcting occlusion.

Wisdom teeth:to remove or to treat?

If a third molar grew correctly and is just affected by caries, you can have it treated, of course. Although its inconvenient place makes treatment of a wisdom tooth difficult. If there are more serious complications, it is better to discuss appropriate treatment options with a dentist.

Is it necessary to remove wisdom teeth? If there is no space in the jaw for another tooth, the third molar will have to make way for itself pushing its competitors (neighbouring teeth). And this means that complications are inevitable. In this case, the best solution is to remove the wisdom tooth. 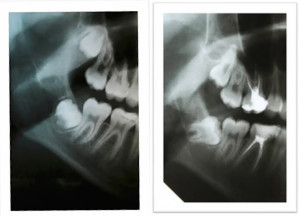 You see X-rays of Konstantin. The first one was done during a scheduled exam, when he was 16 years old and his dentist discovered rediments of wisdom teeth. An orthodontist found that there is not enough space in the row of teeth and recommended that the eighth tooth to be removed. The patient decided against doing that. Four years later he presented with complaints of the pain in a wisdom tooth, fever, crowded teeth. A surgeon performed a complicated surgery to remove molars causing the issues, which could have gone much easier and be much cheaper four years earlier. Apart from that, after a wisdom tooth was removed, Konstantin was recommended to wear brackets, which also requires certain amount of money to be spent. You also have to keep in mind that a pregnant woman cannot have a wisdom tooth removed before the 13 week and after the 32 week of pregnancy. It is during this period that a mother’s immune system functions the best and the risk for a fetus is minimal. It is best, however, for a pregnant woman to see a dentist regularly and prevent possible issues (including issues with wisdom teeth).Is it possible to avoid issues linked to wisdom teeth? Of course, it is. To do this, it is enough to see a dentist for a professional hygienic procedure once every six months and for a preventive exam once a year. If you have troubles with a wisdom tooth, an inflamed gum or you doctor discovers issues linked to the eighth teeth at an early stage, follow his recommendations and stay healthy!